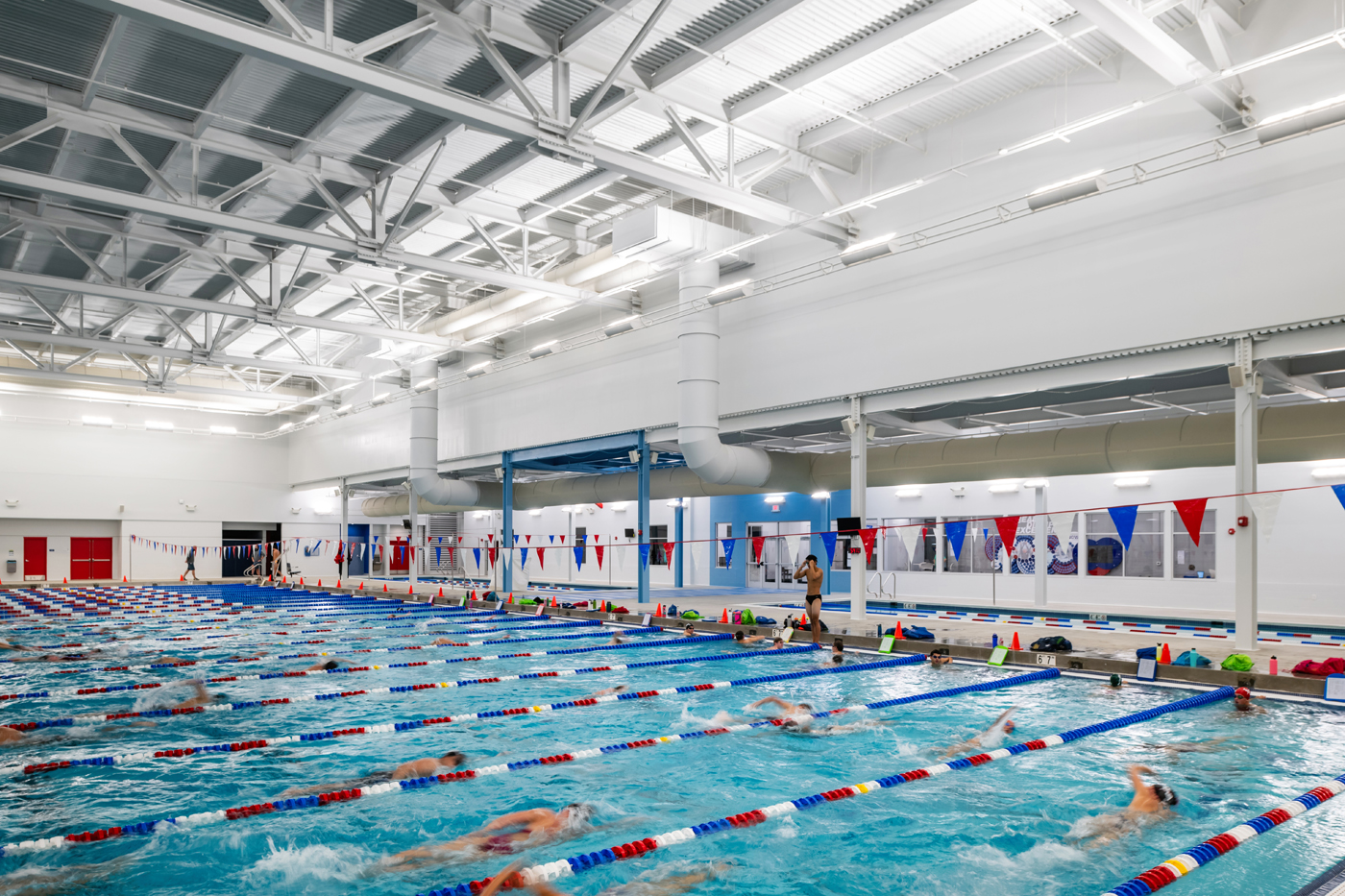 The ASK: fit an Olympic-sized swimming pool into a shuttered two-story Macy’s department store. The answer: a design team with gold-winning ideas.

In 2016, the 100,000 square-foot anchor Macy’s at Richmond’s Regency Square Mall closed its doors. A few years later, NOVA of Virginia Aquatics—the competitive swim club and training ground for Olympic hopefuls—officially outgrew their location and began the search for a space large enough to support their year-round program serving nearly 800 swimmers. What if big-box retail could become human-scale recreation?

“Our job is to dream big and imagine all the possibilities for a space,” says Sheena Mayfield, AIA, an architect with Baskervill. “How do you look past the current function of a building, and strip it down to structure and volume? That’s the first step in casting a vision for an adaptive reuse project.”

But was it possible? We asked our structural partner, Dunbar, to investigate if it was even possible to construct a swimming pool in an operational mall. To the delight of everyone involved, the answer was yes. We put pencil to paper and determined that we needed to design for three things: the pool itself, the support space, and the future.

The first phase of the project included adding a 50-meter-pool—sized for Olympic meets—two 25-yard practice pools, and 800 bleacher seats into the existing store shell. Pool construction is a unique process involving multiple steps: the foundation is underpinned, and then the structure itself is formed using shotcrete, which is a process of projecting a concrete mix at a surface at high velocity. The rough basin is then “squared” with plastering, followed by tile installation (including lane lines and depth markers). The plaster must be cured underwater, so filling the pool was as much a part of the construction as part of the finished product. But before all that, we needed to get Macy’s pool-ready.

When construction began in 2019, the existing two-story department store became walls, a roof, and a sea of columns and beams. The 14-foot ceilings that seemed to soar in a department store full of racks felt cramped in the context of an Olympic-sized swimming pool, which is 50 meters (164 feet) long and 25 meters (82 feet) wide. The solution: simply cut a hole in the second floor to bring up the ceiling to double-story height.

“It’s not so easy,” chuckles Tommy Huffman, PE, a structural engineer at Dunbar. “Roofs need support. But we can’t have swimmers running into columns in the middle of the pool. After several brainstorming sessions with Baskervill, the client, and the general contractor, we figured out that we needed to eliminate 18 columns without removing the existing roof structure. To do that, we built a 112-foot-long truss—which is essentially a support system made up of triangles—in place, with hydraulic jacks to temporarily raise and lower the roof.”

Supporting the second story wasn’t the only logistical hurdle in getting the pool in. Two bus-sized dehumidification units had to be installed on the roof via crane, and nearly 110,000 cubic feet of old slab and soil needed to be removed through a single overhead door—all while the rest of the mall and surrounding parking garage remained operational.

A building’s function comes from so much more than its main feature. Support spaces—like lobbies, lockers, and lavatories—need just as much design power to create a comfortable experience for occupants.

Our design process yielded a number of considerations for the non-pool areas. How could we control the climate, so dirt stays out of the pool deck and moisture (and that chlorine scent!) stay out of the lobby? How should we think about safety when designing changing rooms? And, how do we create adjacencies that work for swimmers of all ages, along with coaches, parents, and spectators?

A mix of changing, gathering, and restroom spaces enabled us to provide options for the comfort and safety of all ages, genders, and group sizes. Team rooms were created separately from locker facilities, along with gendered restroom and showering facilities, all-inclusive changing areas, and family changing rooms. Private areas are purposefully small and auditorily connected, while public areas have high visibility. The team shop and reception area were positioned to add a layer of supervision to who goes in and out of the building, and to give parents a place to wait without having to enter the pool deck.

So, what’s next for NOVA Aquatics? Transforming the Macy’s into a functional pool center for their team was only first phase. In the future, NOVA’s new facility has the potential to be a sports tourism magnet, or even expand to accommodate recreational swimming. With the second floor—open to the pool below, unfinished—there’s plenty of room for possible mezzanine seating. Part of the phase one design thinking included planning for those possibilities. Without knowing exactly what’s in store, our architects asked how to make future design and construction easy. The answer included carefully thought-out circulation paths (so that future swimmers don’t have to cross through construction zones to get to useable areas) and leaving certain design options open so that carefully-chosen finishes don’t need to be demolished when phase two rolls around.

“This pool represents more than just the potential for sports tourism. Swimming has immeasurable proven health and safety benefits,” says Sheena. “And adaptive reuse—transforming an existing, shuttered building into something new and usable—has the power to revitalize the surrounding community and invite infill development. The new NOVA Aquatics Center represents an exciting charge forward on all of those fronts. Asking crazy questions—like whether a mall store can become an indoor pool—is how we keep our design brains sharp and build a future that’s lively and sustainable.”

View All
INTERNet: Rethinking Internships in the Age of COVID-19
December 2, 2021

INTERNet: Rethinking Internships in the Age of COVID-19