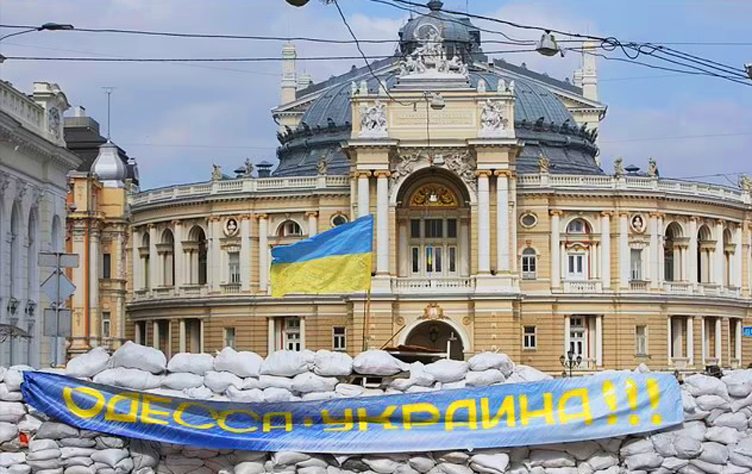 In 2014, Former Ukrainian President Petro Poroshenko inaugurated October 14 as Defenders Day to honor the heroism of the defenders of independence and territorial integrity of Ukraine, who bravely stood against Russian aggression. This Defenders Day, we share a story of solidarity.

The historic city of Gdańsk, Poland—located in the north at the mouth of the Vistula River along the Baltic Sea and home to Baskervill’s European office—has been a stronghold against communist aggression dating back to the Second World War. The birthplace of the Polish Solidarity Movement, the city helped lead the peaceful transition to democracy after the fall of the Soviet empire in 1989. Today it’s a thriving center for commerce, industry, and the arts, and a welcoming refuge for thousands of Ukrainians fleeing the war at home.

In the early months of the war earlier this year, an estimated 4 million Ukrainian refugees arrived in Poland in search of safety and a future. Poles united, organizing to aid their Ukrainian neighbors in every possible way. Immigration procedures were simplified or suspended, while ordinary citizens took refugees into their own homes, so no refugee camps were needed, allowing Ukrainians to live, work, and study in Poland more easily.

Baskervill’s Gdańsk-based team was no different. Committed to long-term support and meaningful contributions to the situation, the team in Gdańsk—led by Managing Director Marcin Garbacz—created a position dedicated to fellow designers in the Ukrainian-speaking safe harbor, added Baskervill to a newly created database of firms in search of talent from Ukraine, and went to work securing housing for potential future employees.

Shortly after, the team crossed paths with Ukrainian native Alla Lobchuk. In search of a new role, and home, following her departure from Ukraine, Alla quickly joined Baskervill’s Gdańsk team as a designer.

Alla was born and raised in the beautiful Ukrainian city of Odesa. Even from the very first day of the Russian Invasion, Alla’s hometown was in crisis and under attack by cruise missiles and ship artillery.

“We tried to help each other and our armed forces by volunteering,” explained Alla. “But soon we understood there were no more safe places in Ukraine, and I started looking for any opportunities to take my brother and mother to a safe place.”

Alla took to the internet and began sending her considerable portfolio all over the world in hopes of protecting her family as quickly as possible. This was when Baskervill first discovered Alla. Both Alla and Marcin agree that the initial interview conducted over the sounds of sirens and air defense was one they’ll never forget. She was promptly brought on board, and Alla and her family made their way to the Polish border and eventually to Gdańsk.

“Marcin met us in Gdańsk where my family and I settled in a house with other Ukrainians. This was especially great because we were able to support each other in these difficult times.”

Since joining the team, Alla has been working as a designer in Baskervill’s Education Studio where she thoroughly enjoys being a valued member of the Studio team and participating in office activities.

“I love working with a wonderful team that inspires me every day,” Alla said. “I have been especially thankful to be able to work remotely. I appreciate the ability to be with my family who is currently still in Ukraine when I need to.”

Even though Alla has been able to settle into a safer, more stable life in Gdańsk and at Baskervill, her thoughts never stray far from home.

“The struggle is still very much ongoing. Ukraine is forever in my heart, and I’m glad I can continue to support my family and country from Poland. We are proud of our defenders, doctors, and volunteers. Glory to Ukraine!”

View All
In Spirit of Solidarity: Sharing Alla’s Story This Defenders Day
October 13, 2022

Q&A: John Currie, FAIA on Architecture and Planning in Service to Public Health